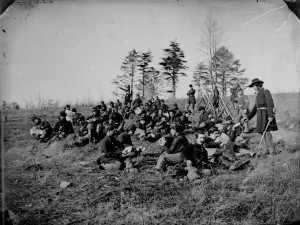 My head is spinning. Sixty US Senators just voted for a bill that allows citizens to be detained without due process of law. (1) The military is assigned the authority to manage these US citizens as it pleases, out of the public eye. Likely many of them will end up in private prisons without recourse to any legal remedy.

Until now, I always thought that the Supreme Court would overturn such a law based on the precedent of Posse Comitatus Act. Now, I worry.

The Posse Comitatus Act (2) was enabled in June of 1878. It forbids local law enforcement to call on the Army or Air Force to enforce the laws of the land.

The Act was passed after the Tilden/Hayes election compromise, which heralded the end of Reconstruction. Federal Troops had remained stationed in the former Confederacy until 1877. They were withdrawn after Rutherford B. Hayes became President, as part of the Faustian bargain cut to give Hayes the nod.

The Posse Comitatus Act protects states and inhabitants from the possibility of a military coup as well as limiting the imprisonment of political opponents.

Ms. LaRosa graduated from law school in 2004. She started law school three weeks before 911, and the experience turned out to be educational in ways she never could have anticipated. She maintains a blog at Hypatia of California, where she posts sophisticated analyses of world events alongside divinely silly satire. Ms. LaRosa likes to have fun and does not like character-building experiences. This website was born on November 27, 2011. It will change, I promise you. If you think the change is not for the better, please share! See, the more editors I have, the better I work. Please contact her at via at olivialarosa.com to join the larosalist or for any other reason. Kindly humor me by sending only clean and legal communications. Thank you so much.