This article in the New York Times can serve as a foundation for analysis of a broad range of socioeconomic issues and policies. ~Via

Tom Edsall on politics inside and outside of Washington.

For a moment, let’s forget the central debate of our political period — how much of a role government should play in our lives — and ask a different question: can government policies counteract inequality in any meaningful way?

Four political scientists – Adam Bonica of Stanford, Nolan McCarty of Princeton, Keith T. Poole of the University of Georgia and Howard Rosenthal of New York University – take this issue head on in their paper, “Why Hasn’t Democracy Slowed Rising Inequality?” published earlier this year in Journal of Economic Perspectives.

During the past two generations, democratic forms have coexisted with massive increases in economic inequality in the United States and many other advanced democracies. Moreover, these new inequalities have primarily benefited the top 1 percent and even the top .01 percent. These groups seem sufficiently small that economic inequality could be held in check by political equality in the form of “one person, one vote.”

Bonica, McCarty, Poole and Rosenthal argue that politics can be an effective tool to restore economic fairness — that government can, and should, correct imbalances the market produces, providing for those who cannot compete, ensuring opportunity for those who can and blocking those who would appropriate to themselves what the authors see as an excessive share of our national prosperity.

The authors produce a number of graphics to support their claims. Figure 1 shows a positive correlation between the share of income going to the top 1 percent and the level of polarization between the two political parties in the House of Representatives. 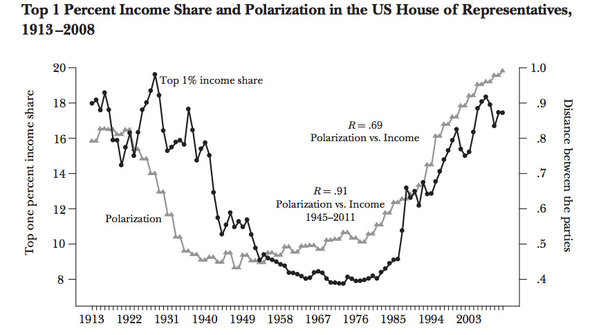 The Federal Election Commission and the Internal Revenue ServiceFig. 1

The Federal Election Commission and the Internal Revenue ServiceFig. 2

In the interest of promoting debate, I ran the questions raised by the Bonica paper — “do democracies have the capacity to remediate massive increases in economic inequality” — by a number of experts, including Isabel Sawhill and Gary Burtless of the Brookings Institution; Andrew Fieldhouse and Benjamin Landy, policy analysts at the Century Foundation; Sean Reardon, a professor of education and sociology at Stanford; Austin Nichols of the Urban Institute; Daron Acemoglu, an economist at M.I.T.; and Leslie McCall, a sociologist at Northwestern.

Let me organize the responses under five topic headings:

To what degree is growing inequality a result of political decisions or of economic and demographic trends?

Fieldhouse contends that Bonica and his colleagues

Looking at the issue from another angle, Acemoglu makes the case that the authors spend too little time on what he sees as the most important reason that political solutions are not likely to work: the global economy has become even more competitive. Capital is internationally mobile, and corporations and their owners will move to other countries when faced with what they see as excessive taxes and regulatory burdens:

With the technological changes and the more globalized economy we live in, the cost of stemming the rise in inequality has also increased. A cross-country perspective shows this very clearly. Several European countries, including Germany and Sweden, which have well-functioning democracies and strong social democratic parties, have also reformed their labor market and product market institutions, leading to greater inequality over the last two decades. A cross-country perspective also indicates that the factors the paper mentions can at most be a portion of the puzzle.

The rise of inequality in Scandinavian social democracies, according to Landy, suggests that explanations based on phenomena unique to the United States, like the disproportionate influence of money in political campaigns, are inadequate:

Globalization and changes in technology have been a boon to owners of capital, allowing them to decrease their labor costs, boost productivity and, in many cases, replace workers’ jobs entirely.

Sawhill also argues that “income inequality is growing for reasons that have little to do with politics,” including “changes in household composition, more single parents, like marrying like, and wage inequality produced by the increased demand for well-educated workers and the failure of the supply of educated workers to keep pace.”

I found no consensus on this.

tax, transfer, and regulatory policy can and should push in the right direction, but it would take large political forces to keep from exacerbating inequality; halting let alone reversing market-based inequality growth of the past three decades would require policy actions beyond the conceivably viable.

Fieldhouse notes that politically untenable policies include the adoption of full-employment monetary and fiscal policies — in other words, a massive jobs program requiring a large expenditure of tax dollars is not in the offing.

In contrast, Nichols of the Urban Institute makes the case that Bonica and his colleagues underestimate “the central importance of taxes” in fueling inequality — because they fail to recognize how much cuts in capital gains rates over the past 25 years have enhanced the wealth of the top 1 percent and especially the top 0.1 percent.

McCall, author of “The Undeserving Rich: American Beliefs About Inequality, Opportunity, and Redistribution,” suggests that liberal interest in raising top rates is a political miscalculation. She argues that survey data show “the public has never really been oriented toward fixing inequality through taxing the rich or especially spending on the poor.” Instead voters want what she calls “market-based redistribution,” which translates into “good jobs with fair pay.”

Intellectual capture of political elites and the political and financial power of the affluent.

There was significant agreement among those I surveyed in support of two key points in the Bonica paper: that leaders in both political parties have come to accept free market ideology without question and that the affluent have used their control of money and other resources to wield excessive power over policy making. Fieldhouse writes that “political capture by the elites,” particularly with respect to the “capture” of centrist Democrats by high finance, “played a big role in financial deregulation, which in turn has greatly exacerbated income inequality growth.”

Acemoglu asserts that “the role of lobbying by the very wealthy and large corporations has truly become a huge liability for American democracy over the last several decades.”

To Reardon, “the current dominant cultural narrative about the market and efficiency and fairness and equality” is crystal clear: “it goes something like this: America = fairness/opportunity = individual freedom = free market.”

the split within the Democratic Party in the late 1960s between “traditional,” blue-collar Democrats and the more radicalized New Left. The Democratic Party’s newfound focus on women’s rights, gay rights and affirmative action alienated a substantial number of older, white liberals. The modern-day coalition of social conservatives and the business community would not be as strong as it is without that schism, which allowed the Republican Party to breed resentment by racializing what were formerly working-class economic issues.

Fieldhouse, in turn, maintains that Democrats have “done a better job promoting ascriptive identity policies and politics than those of general social welfare in recent decades.”

Lack of confidence in the government.

Nichols, without specifically naming the Democratic Party as the source of the problem, touches on what might be called the “confidence gap.”

He contends that “a virtually unprecedented rise in inequality since 1986 could be addressed with higher tax rates. Yet most of the bottom 99 percent does not support dramatically raising taxes on the top 1 percent.” Bonica et al, in Nichols’s view, do not address “the main reason for that phenomenon — which I suspect is a deep distrust of how the federal government makes spending decisions.”

A paper by Josh Bivens and Lawrence Mishel of the liberal Economic Policy Institute, in the same issue of the Journal of Economic Perspectives, asks if “the increase in the incomes and wages of the top 1 percent over the last three decades should be interpreted as driven largely by the creation and/or redistribution of economic rents” or “simply as the outcome of well-functioning competitive markets rewarding skills or productivity based on marginal differences.”

Bivens and Mishel define “rent” as income “in excess of what was needed to induce the person to supply labor and capital,” and they assert that much of the income of the top 1 percent has little to do with productive economic activity and could be taxed away without harm to the economy.

Others writing in the same issue of the journal believe that taxing or otherwise limiting the wealth of the very rich can harm productivity.

N. Gregory Mankiw, an economist at Harvard who was chairman of the Council of Economic Advisers in the George W. Bush administration,writes that

My own reading of the evidence is that most of the very wealthy get that way by making substantial economic contributions, not by gaming the system or taking advantage of some market failure or the political process.

In “It’s the Market: The Broad-Based Rise in the Return to Top Talent,” Steven N. Kaplan of the University of Chicago Booth School of Business, and Joshua Rauh, of the Stanford Graduate School of Business, argue that talent is unequally distributed through the population and that this is reflected in the inequality of rewards. They suggest that

One explanation that has been proposed for rising inequality is that technical change allows highly talented individuals, or “superstars,” to manage or perform on a larger scale, applying their talent to greater pools of resources and reaching larger numbers of people, thus becoming more productive and higher paid.

Malcolm Gladwell’s explanation for inequality in “Outliers: The Story of Success” bridges, to some extent, the arguments of left and right. He makes the case that it is hard work – famously, 10,000 hours of hard work – that leads people to gain abilities that then result in the acquisition of disproportionate resources. Gladwell notices, however, that a remarkable degree of good luck is needed to realize the gains from even well-honed skills.

Superstar lawyers and math whizzes and software entrepreneurs appear at first blush to lie outside ordinary experience. But they don’t. They are products of history and community, of opportunity and legacy. Their success is not exceptional or mysterious. It is grounded in a web of advantages and inheritances, some deserved, some not, some earned, some just plain lucky – but all critical to making them who they are.

Gladwell adds this twist to the debate:

It is those who are successful, in other words, who are most likely to be given the kinds of special opportunities that lead to further success. It’s the rich who get the biggest tax breaks. It’s the best students who get the best teaching and most attention. And it’s the biggest nine- and ten-year-olds who get the most coaching and practice. Success is the result of what sociologists like to call “accumulative advantage.”

Inequality appears to liberals and many others to be palpably wrong. But conservative and liberals often find themselves in agreement that inequality in and of itself may not be the issue — it’s the way it is deepening and spreading and the small size of the group to whom the benefits are accruing that worries people most. Inequality exists in democracies and non-democracies alike; it clearly stems from multiple causes. But “the question for public policy,” as Greg Mankiw puts it, is “what, if anything, to do about it.”

This entry was posted in Civil Society, Corporate-Congressional Complex, Democrats: The Good, the Bad, and the Ugly, Economics 101, Fascist America, Media: Corporate and Controlled. Bookmark the permalink.