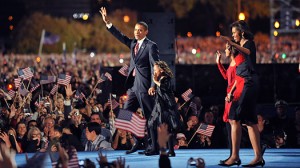 Pay Down the Deficit with the Money You Would Have Spent?

Both of you are smart enough to know that it’s all over but the shouting. As time passes, more and more of the dirt under that shiny clean face will come to notice, Mitt. I saw you in a video the other day, and I don’t think that you yourself even believe what you are saying. Your comments are remote, or insincere, or mistaken, or or dishonest. Everyone can smell it.

Obama, you can burnish your credentials, along with Mitt’s, by taking the money you have raised to date, paying your campaign bills, and then putting the balance towards the US deficit. That seems to be an area where the Republicans have confused people about the meaning of the deficit, and the Democrats would be hard pressed to avoid supporting such a payment.

So take that money and help America instead of subjecting us to this bad theatre for another 7 weeks. K?

This entry was posted in Corporate-Congressional Complex, Frankly Political. Bookmark the permalink.