First a quote from a friend that rings so true in the “dis-information age”: 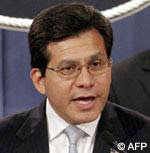 Our universe is governed by fictions of all kinds: mass consumption, publicity, politics considered and managed like a branch of publicity, instantaneous translation of science and techniques into a popular imagery, confusion and telescopage of identities in the realm of consumer goods, right of pre-emption exercised by the television screen over every personal reaction to reality. We live at the interior of an enormous novel. It becomes less and less necessary for the writer to give fictional content to his works. The fiction is already there. The work of the novelist is to invent reality.

-J.G. Ballard, from the introduction of the French edition of Crash

“The Constitution doesn’t say every individual in the United States or every citizen is granted or assured the right to habeas [corpus]. It doesn’t say that.”

If you guessed Attorney General Alberto Gonzales, you’re correct. In fact, the Constitution states that habeas corpus rights cannot be suspended except in times of rebellion or invasion. For centuries, this has meant that a person could challenge his or her detention in an independent court of law – unless those exceptional circumstances existed.

Gonzales’s declaration should strike fear in all of us. His dangerous comments before the Senate Judiciary Committee betrayed the Constitutional rights he was sworn to protect as our nation’s top law enforcement official…and defied common sense, too. Watch the video!

This entry was posted in Project to Enforce the Geneva Conventions. Bookmark the permalink.