The darkness hidden within the Panama Papers frightens me. We need an economy that does not run on larceny and lies. A corporate charter is not a license to kill, maim, and plunder.

Three stories I found today boggle the mind. Only one is from the Panama Papers.

About two weeks after Denmark revealed it had lost as much as $4 billion in taxes through a combination of fraud and mismanagement, the minister in charge of revenue collection says that figure may need to be revised even higher.

This terrible loss was discovered via the Panama Papers. The news on that front has been sparse. More research needed. The scale of the loss is unimaginable.

It is going to take decades to work through those documents. Dishonesty at these high levels boggles the mind.

The claim that business is over-regulated is absurd. At some point during my lifetime, corporations have convinced people that their status is a license to steal. 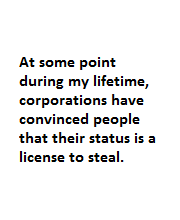 Over a five-year period, 5,300 Wells Fargo employees were fired over the practice cited by the CFPB, CNBC confirmed with Wells Fargo.

According to that complaint, Wells Fargo employees pushed checking account customers into savings, credit and online accounts that could generate fees.

Teenager hacked CIA head’s personal email, which contained hisapplication for security clearance. And we thought Petraeus was reckless and sloppy with his email account.

Speaking to parliament on Thursday, Tax Minister Karsten Lauritzen said he “can’t rule out” that losses might be bigger than the most recent public estimates indicate. It would mark the latest in a string of revisions over the past year, in which Danes learned that losses initially thought to be less than $1 billion somehow ended up being about four times as big.

The embarrassment caused by the tax fraud, which spans about a decade of successive administrations, has prompted Lauritzen to consider debt collection methods not usually associated with Scandinavian governments. Denmark has long had one of the world’s highest tax burdens—government revenue as a percentage of gross domestic product—and a well-functioning tax model is essential to maintaining its fabled welfare system. (1)

Bank employees were told that the average customer tapped six financial tools but that they should push households to use eight products, according to the complaint.

The bank opened more than 2 million deposit and credit card accounts that may not have been authorized, according to the CFPB. (2)