After Bold Step on Syria, French Leader Finds Himself Dismissed as Lackey 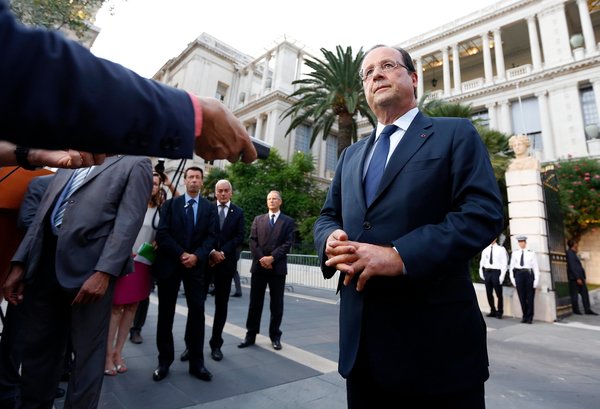 President François Hollande spoke with journalists in France this weekend. His decision to back President Obama’s call for a military strike against Syria has been received very badly at home.

PARIS — As portrayed in a satirical television show here this week, President François Hollande is left behind to hold President Obama’s coat while the American leader and President Vladimir V. Putin of Russia hold private talks. Mr. Hollande gullibly concludes he is playing a key role.

Later in the show, “Les Guignols de L’Info,” a rough French equivalent of Jon Stewart’s “The Daily Show,” Mr. Hollande is seen interrupting a visit to a school to ask Mr. Obama’s permission to use the bathroom.

If Mr. Hollande ever thought that his decision to stand steadfast alongside the United States in backing a retaliatory strike against Syria would give him new stature on the global stage or help him at home, the last week has been a sharp shock.

Public opinion is running strongly against him; a poll published this weekend in the conservative daily newspaper Le Figaro showed about two-thirds of the French opposed to military action against Syria. There are growing demands that he grant Parliament a vote on the matter, and considerable speculation that he could lose if he did.

The White House is doing its best to buttress Mr. Hollande — Secretary of State John Kerry, on a visit here this weekend, used a televised appearance to make the case, in French, that failure to act would be akin to the Munich Agreement of 1938, in which Britain and France sought to appease Hitler by allowing him to control the Sudetenland. But the French president is learning, like British leaders before him, that close alignment with Washington carries as much risk of looking weak as opportunity to look strong.

Earlier this year the French marveled when Mr. Hollande, inexperienced in foreign policy, weighed down by economic woes and often seen as vacillating, executed a swift and successful military strike in Mali. They rewarded him with an increase, though fleeting, in his usually dismal approval ratings.

This time around, so far at least, he has not received even that brief benefit.

Mr. Hollande is facing an avalanche of sometimes contradictory criticism from left and right: that he is acting rashly in committing France to military action; that he is being too timid in awaiting the go-ahead from the United States and the United Nations; that he needs to heed public and parliamentary opinion and that he needs to assert the traditionally broad powers of the French president to employ the armed forces without parliamentary approval.

Perhaps most of all, he is being criticized for failing a basic test of French politics — protecting the country’s pride. Having quickly agreed to join in a military action, France is now forced to wait on the sidelines while Congress debates whether to give its approval. Mr. Hollande’s critics say he looks like a lackey.

Even some who have endorsed a military strike have taken Mr. Hollande to task for his handling of the issue. A front-page editorial in Le Figaro by Paul-Henri du Limbert said that no one could criticize Mr. Hollande for wanting to face down barbarity, but nonetheless his strategy left something to be desired. The president, he said, had somehow managed to “throw a spotlight on his own powerlessness.”

“It is a singular situation,” Mr. du Limbert concluded. “but no one can expect that France will come out of it looking stronger. “

To some degree, Mr. Hollande’s decision to stand with the United States and Prime Minister David Cameron of Britain in calling for a military strike against Syria to “punish” the Assad government for a chemical weapons attack is well in line with French tradition.

French troops were gassed in World War I and France has been long been active in trying to ban such weapons. Mr. Hollande’s Socialist Party is generally sympathetic to humanitarian intervention in the case of atrocities.