I had dinner with an old friend in June. I provided him with a brief summary of the alarming events in my recent life. He explained to me that I was a “lightning rod.”

I raised my eyebrow.

He explained, “I was an EMT. Everyone knew who the lightning rods were. When you were on shift with them, you knew that lots of strange things were going to happen. Some people attract trouble despite every attempt to avoid it.”

“I am one-half lightning rod. I was on shift once with a FULL lightning rod. I have forgotten most of what happened that day, but I remember feeling as though I had entered the Twilight Zone, and that I did not have one minute to rest.”

A search of the literature on human lightning rods yields little. Pythagoras, however, was favorably described as a lightning rod.

“His tranquil but nevertheless quite charismatic personality was a lightning rod for young intellectuals eager to be accepted as a disciple of the great teacher. The application process was difficult.”

Not that I am comparing myself to Pythagoras. That’s for others to do. *snicker* (Paraphrasing “Aldous Snow” in “Get Him to the Greek.)

No one will dispute that my life has been complicated, dangerous, tragic, and dramatic all out of proportion to my mild-mannered and gentle personality.

For example, I crossed the country last February to see my son and his family. The night before I was to fly home, a frantic man appeared on my son’s doorstep. Jessica said, “Don’t open the door. He looks crazy. I’ll get Scott.”

Scott opened the door. The man said that he had hit a car in front of Scott’s house, and that it was really bad. I started swearing a blue streak. My rental car was parked in front of the house.

Scott told me that he would handle everything, and he did. After the man who had hit the car had left, Scott said I could come out.

My rental car, which only had 500 miles on the odometer, was so badly totalled that it had to be hoisted onto a flatbed towtruck to get it out of my son’s front yard. 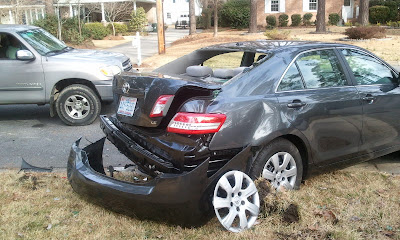 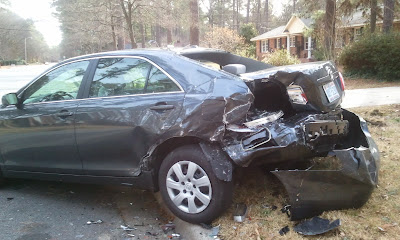 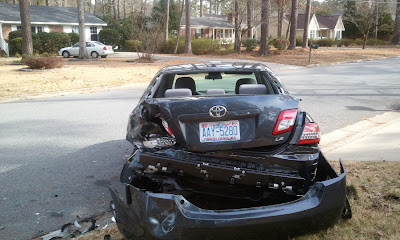 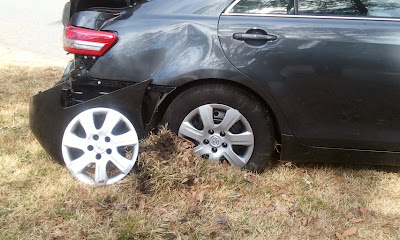 Sweetie found a property in the city where he longed to live. We went by on Saturday, saw a dilapidated old house with a sagging roof and a large yard overgrown with weeds. He decided that he wasn’t interested. As we drove away, an inchoate sense compelled to look back at the house. I thought that it was a “sweet spot.” I felt drawn to return.

The next morning, we decided to make an offer on “the perfect house” we had toured yesterday. I said, “Before we decide, would you mind if we drove by the ‘old house’ again?” He readily agreed.

Sweetie wrote an offer on the ‘old house’ the next day. I am an ethical, experienced, and tenacious real estate broker. I represent buyers only. I surely know how to put the thumbscrews to a seller to get disclosure of all known defects in a property.

Sweetie opened escrow a week later, in early March, after my intellectual chokehold on the seller got him the information he needed to make an informed decision.

I took and passed the broker’s exam on March 10.

My knee had been bothering me for some weeks. On March 12, it became so painful that the vibrations from Sweetie walking nearby sent electric shocks up my leg. The pain increased in intensity for several more days. I saw a physician’s assistant, who did not seem to know much about orthopedic medicine, and who seemed not to believe my description of my malady. She spoke to a doctor at the hospital about my case. During the conversation her body language reflected anger and resentment.

I learned that I could not be seen for another four days, on March 25. My closed eyes leaked slow tears.

She turned to me and said, “He always talks down to me.”

Guess what. “He” turned out to be the Physical Medicine doctor who saw me. “He” was the among the rudest men I have met in my long and trouble-prone life…prolly among the top 5, though.

As “He” was the head of the Physical Medicine Department at that regional hospital, I knew that I could never get help there. I relayed my experience through complicated means to my primary physician, Dr. Doctor, a compassionate and patient woman.

I could not tell the story in the 1200 characters allowed in their form email, so I prepared it in Word and turned it into a digital image, which I sent as an attachment.

The next day, Dr. Doctor had set up an appointment for me at another convenient regional hospital and I received a cortisone shot, which gave me immeasurable relief within 24 hours of administration. I felt grateful and happy.

My pain ebbed to a dull ache…unless I moved. I was still taking Vicodin in search of more relief. I do not like taking Vicodin. The side effects cause me great discomfort.

On March 27, my knee gave way and I fell down two steps to land flat on my face on a concrete patio. I did not move for 10 minutes, all the while leaking astonishing amounts of blood. Back to the doctor…to learn that I had broken my nose.

***
On April 7, I fell ill during a business trip. I called home and told Sweetie that I thought I should remain at the hotel, because it was bad, and I did not want to infect him. He told me not to be silly and come on home.

I thought I had fetched up a nasty case of the flu. But the symptoms were wild, and strange! My temperature fluctuated between 95 degrees and 103 degrees. Chills and fevers ravaged me constantly, in succession. My stomach rebelled. I slept only during brief naps.

Poor Sweetie, stressed, worried, and overburdened, began to wonder if I had malaria. I remembered how my friend Lila was when she had pneumonia…she did not know what was wrong with her. Her husband had to tell her that she needed to go to the hospital.

I consulted with Dr. Doctor’s staff several times over many days. Dr. Doctor was overbooked, they explained. They also explained that I had the flu and that it was a bad flu, and it would go away after ten days. Moreover, they were swamped, and they could not do anything for me if I did come in, because it was the flu.

I explained that my body temperature was fluctuating between 95 degrees and 103 degrees. They did not find that remarkable, but I sure did. My body temp has never been as low as 95 degrees, ever.

Well, once it was 92 degrees but it was because my surgeon had put too much saline into my body during an arthroscopic procedure. I received cocaine in the recovery room to stimulate whatever it is cocaine stimulates. Must have something to do with heating you up. “I get no kick from cocaine.” Cole Porter; I Get a Kick Out of You.

So, I gathered up my courage and decided to spare them the trouble. I would be a brave soldier and wait it out.

My hair matted up. A number of revolting odors arose from my flesh. I showered when I could but the reek returned within an hour.

I had only five more days left to endure to prove to their satisfaction that I was dreadfully ill.

***
Meanwhile, Sweetie had a nervous breakdown. It was impossible for me to get rest because of the racket he made. I had soaked through one mattress and the couch separated whenever I laid down on it. I knew that I was not going to get better there, so on Saturday I told Sweetie that I had to leave. Chalk-white, running a temperature and sweating gallons, I packed my bags and loaded the van.

He asked me if I was breaking up with him. I said, “No. I just need peace and quiet so I can heal.” He said, “OK. Please call me when you get settled in.

A friend came to see me, fetching me food, drink, and medication at my whim. I felt peace descending upon me. When he left, I felt as though I had turned the corner.

That night, at a lovely hotel, I began to hallucinate. The next morning, I began coughing up blood. I went to the hospital as soon as I could summon the strength. I saw a doctor at 7PM on Monday.

I did not receive the help for which I had pled until 14 days since onset. The doctor-on-call prescribed a broad-spectrum antibiotic. I began to improve 14 hours after the first dose.

We were at the end of escrow. I had not been able to pack anything for our evacuation from Sonoma.

I had thrown enough into the van so that I could camp out at the new house. I have lived in primitive conditions more frequently than the typical top-tier law school graduate, I state without hesitation.

This entry was posted in Olivia's Stardust and Lollipops. Bookmark the permalink.