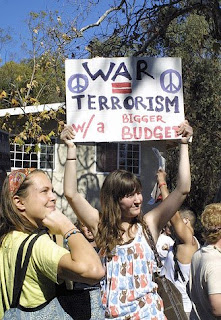 I am SOOOOO PROUD of my alma mater!

Today more than five hundred UCSB Students Against War disrupted the military Institute of Collaborative Biotechnology conference to demand an end to UC complicity in illegal weapons research designed to kill Iraqis in an illegal war.

Students and supporters of peace and demilitarization marched directly into the Corwin Center Pavilion where the ICB conference attendees were having lunch between their Army-sponsored research sessions.

Speakers for the march made it clear that students support scientific research but when research is done for military paymasters it makes campus scientists into war accomplices at a time when the U.S. is occupying foreign lands in internationally condemned wars of aggression.

For example, A UCSB researcher worked on technology for a new type of bomb which was dropped on an Afghan wedding, killing 40 Afghanis gathered to celebrate the love between two people and their families. U.S. officials denied responsibility for the bombing until camera footage made it impossible to deny. To the researcher’s horror, his teammates working on the bomb expressed no remorse for the innocents killed by their invention. Instead, they celebrated the news because the bomb worked as they intended it to.

Protesters reminded ICB attendees that scientists have moral responsibility for the consequences of their actions and when they work for the military, the consequence is that people die, many of them innocent civilians. One speaker gave numbers on just how much money is being funneled into military research:

“UCSB rakes in 50 million dollars a year for following the Army’s orders. We came here to get an education and make valuable contributions to the world, not to help conquer it. This is not a military base, it is a university. It’s time to demand an end to UCSB’s participation in the war machine.”

There was a heavy police presence but protesters were not intimidated and conducted their non-violent direct action against UCSB war profiteering with courage and determination. Police arrested three protesters. Eyewitnesses said there was no justification for the arrests and hundreds of people chanted “Let them go! Let them go!” and laid their bodies on the pavement around police cars as a human shield demanding that the peaceful protesters be released. The arrested protesters urged everyone to return to the ICB conference to finish what they came to do and protesters returned to the Corwin Pavilion peacefully to continue disrupting the ICB.

Students Against War Santa Barbara declared victory as the ICB conference was disrupted, military scientists were informed about the consequences of their actions and a message was sent to UCSB officials that students will not rest until UC complicity in war ends.

UPDATE: The ICB conference was shut down and did not continue its second day sessions. This constitutes a major victory for UCSB students in the campaign to demilitarize UCSB and the whole UC system.