Poster’s note:
Really no coverage on this in MSM (main stream media) 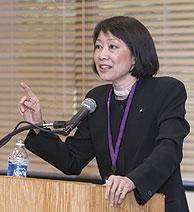 Referring to the Bush administration’s purge of former San Diego-based U.S. attorney Carol Lam, Sen. Arlen Specter (R-PA) questioned recently on the Senate floor whether she was let go because she was “about to investigate other people who were politically powerful.”

The media reports this morning that among Lam’s politically powerful targets were former CIA official Kyle “Dusty” Foggo and then-House Appropriations Committee Chairman Jerry Lewis (R-CA). But there is evidence to believe that the White House may also have been on Lam’s target list. Here are the connections:

– Wade’s company MZM Inc. received its first federal contract from the White House. The contract, which ran from July 15 to August 15, 2002, stipulated that Wade be paid $140,000 to “provide office furniture and computers for Vice President Dick Cheney.”

– Two weeks later, on August 30, 2002, Wade purchased a yacht for $140,000 for Duke Cunningham. The boat’s name was later changed to the “Duke-Stir.” Said one party to the sale: “I knew then that somebody was going to go to jail for that…Duke looked at the boat, and Wade bought it — all in one day. Then they got on the boat and floated away.”

– According to Cunningham’s sentencing memorandum, the purchase price of the boat had been negotiated through a third-party earlier that summer, around the same time the White House contract was signed.

To recap, the White House awarded a one-month, $140,000 contract to an individual who never held a federal contract. Two weeks after he got paid, that same contractor used a cashier’s check for exactly that amount to buy a boat for a now-imprisoned congressman at a price that the congressman had pre-negotiated.

That should raise questions about the White House’s involvement.

UPDATE: Perhaps this was the “real problem” Sampson was referring to: